Bringing Bovodar and the Bears into the visual medium has its challenges.  For example, how shall we portray the Deer Queen and her minions?  Specifically, I'm wondering how the legs will be portrayed.  If the kneecaps are bent in a convex direction, then we no longer have anthropomorphic deer---instead we have deer people with human legs.  On the other hand, if we keep the Deer People 's kneecaps concave, it will be natural in the way a deer's legs ought to be, but how will they walk with such legs?

On the other hand, mythical fauns are portrayed in art without too much trouble.  So who knows?

But as long as I'm bringing up deer people, there actually is precedent for imagining a tribe of hostile she-deer.  I'm referring to the myth of the Deer Women, told by the American Indians in my part of the country.


Deer Woman, sometimes known as Deer Lady, is a shape-shifting woman in Native American mythology, in and around Oklahoma, the Western United States and the Pacific Northwest. She allegedly appears at various times as an old woman, or as a young beautiful maiden, or as a deer. Some descriptions assign her a human female upper body and the lower body of a white-tailed deer.

In various folklores, the Deer Woman is described to sometimes be seen as a beautiful woman just off the trail or behind a bush, calling to men to come over. Deer Woman is often said to have all the features of a normal young woman, except her feet which are shaped like deer hooves and her brown deer's eyes. Men who are lured into her presence often notice too late that she is not a natural woman, and are then trapped by her magic to waste away until death.Other stories and traditions describe the sighting of Deer Woman as a sign of personal transformation or as a warning. Deer Woman is also said to be fond of dancing and will sometimes join a communal dance unnoticed, leaving only when the drum beating ceases.

According to Ojibwe tradition, she can be banished through the use of tobacco and chant others say that you can break her spell by looking at her feet, which are in fact hooves. Once she is recognized for what she is, she runs away.


In local native lore, the Deer Woman is a seductive siren.  But in my story's universe, this tribe of she-deer are more like evil Xena Princess Warriors.  And while native lore has the Deer Woman as a half-woman-half-deer sort of nymph, my deer folk are all  animal.
Posted by Jack Mikkelson at 11:43 AM No comments:

Work on the Bovodar saga continues apace, hidden from public sight.  That said, we do have some reveals.

Finally, at last, people can now be treated to a visual concept of what Bovodar and his bears look like.  This fleshes out just what the story involves, as well as the tone and direction of the story.  Presentation is 9/10ths of the law, they say. 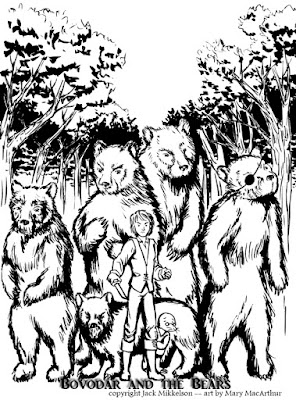 This would not be possible without Mary MacArthur, over at Snowflake Clockwork.  Her talent and enthusiasm for this project has been a huge boost for what I've been doing.  And it is largely thanks to her that this story project will exceed many expectations before all is said and done.

For now, you can purchase the original novel of Bovodar and the Bears over at Amazon for your Kindle.  So if you're interested in having the digital first edition, now is the time to act, read the story, and get an idea of what it's all about.  There is certainly more to come in the future.  Stay tuned.

Posted by Jack Mikkelson at 4:31 PM No comments: