Last time, I discussed the Wolf King in the world of Bovodar and the Bears.  But beyond the ruler, what is the realm like?  What is Bovodar's society like?

Bovodar's world would be, for us, a fantasy land.  There are people within it, but they are outnumbered by talking beasts.  The animals we take for granted in our own world do not merely trot along on all fours and eat from the fields or hunt each other.  Instead, the denizens of Bovodar's world are beasts who walk upright like men.  Sometimes they wear clothes.  They talk, engage in commerce, cook food, and even worship.

There is a social caste system.  For example, (though not mentioned in this book) rats are the lowest creatures.  Anything that small, in fact, is not regarded highly.  Foxes would be lesser than, say, bears.  Men are considered to be the highest among them all, though.  Even the Wolf King honors the place of men in the hierarchy of his citizens.  Many of the dull-minded creatures of Bovodar's world consider men to be magical beings, and it is in fact very rare for men to be seen, as the world is not filled with them.  There are not very many towns or cities that are ruled by only men.  Most cities and villages are ruled by the talking beasts.  In fact, Bovodar's family lives in a forest called Irv Forest.  There are a good batch of people living there, but mixed in are beasts of different kinds, from moles, beavers, and groundhogs, to a tribe of deer living on the forest's edge, and families of buffalo---poor folk---living north of that.

There are dragons in Bovodar's world (though not in this book), and they live in the older parts of the world, far in the East.  They contend that they are the highest, most supreme nation in the world, and they frequently challenge the Wolf King's legitimacy.  But because of the Wolf's power, they stay mostly relegated to the eastern deserts.

Posted by Jack Mikkelson at 11:40 PM No comments:

Email ThisBlogThis!Share to TwitterShare to FacebookShare to Pinterest
Labels: worldbuilding

The Ruler of Bovodar's World 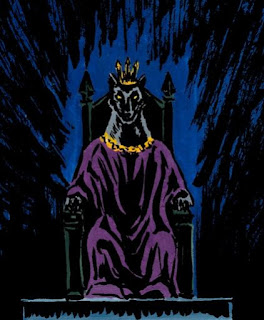 What, exactly, is the world of Bovodar and the Bears?  Where is it?  How did it come to be?  Who lives in it?  What governs it?

The answer to the latter answers all of the other questions.

The world that Bovodar lives in is ruled by one being.  And in the book Bovodar and the Bears, he is known simply as the Wolf King.  However, he is more than just a simple king.  He does not merely rule over a nation or a realm.  In truth, the Wolf King is the emperor of the entire world.  He is no rude beast.  He is not simply a wolf.  He walks like a man, gestures like a man, and is just as smart as a man--even smarter, in fact.  More than that, the Wolf King has powers that cause many to think of him as a deity.

Though the primary form of the Wolf King has been that of a wolf, he has been known throughout the ages to take many other forms.  He is master over the East and the West, the Landed North and the Southern Sea.  He bestows gifts to whom he wishes, and he punishes those he sees fit.  He can lift mountains.  He can move rivers.  He can obliterate cities.  And finally, he can remake beasts to his liking.

Tales of his most glorious works take place in the ancient times, and many find it hard to believe such stories.  It was once said that he single-handedly drove back the entire Dragon Empire.  In another fable, it was said that he elevated himself to the highest height, ascending beyond the clouds and to the moon, where he built his grandest palace.  He is said to be as old as the world, that he can never die, and that he can even heal the injured or sick.

His palaces change from one age to another, but in Bovodar's time, his palace is north of Commotu City.  While many doubt the old stories, his presence in the world is quite real, as he is always governing and watching the world.  He is aware of all things that occur in his dominion, and it is under his rule that dwell both beast and men.

Posted by Jack Mikkelson at 11:27 PM No comments:

Email ThisBlogThis!Share to TwitterShare to FacebookShare to Pinterest
Labels: worldbuilding

The New Edition And Other Projects 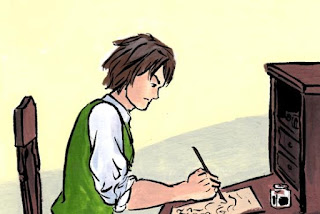 Bovodar and the Bears will soon be transformed into a new edition, and there will be a brand new cover that will capture the eye better than before, courtesy of Mary MacArthur (whom you can follow at Snowflake Clockwork). Now, before all this, I used to not like the idea of having to re-release a book. But then, I remember how Tolkien himself re-released The Hobbit several times. The first edition came out in 1939, and it wasn't until 1951 that he released a second edition. He had to fine tune his manuscript and conform it more to The Lord of the Rings.

As a matter of fact, in the second edition of The Hobbit, Tolkien made Gollum more aggressive against Bilbo and more possessive of the One Ring. In the first edition, Gollum was going to give Bilbo the ring if he lost the riddle game, and at the end of the game, he showed Bilbo the way out of the Misty Mountains. But in the second edition, Gollum ends his part in the series by shouting: "Thief! Thief, Thief, Baggins! We hates it, we hates it, we hates it forever!"

Bovodar and the Bears, will have similar circumstances. Bovodar, after all, is a part of a three-book series. His character grows throughout the books, and his trilogy fits into a larger universe surrounding the Wolf King. So it's not impossible to think that some content revisions will occur, as well as a few new edits.

Work on this novel continues. Bovodar was a young man swept away by the world in Bovodar and the Bears. But in the second book, he's on a mission with an objective. And he's a little older. He has wants and desires. A young man, he begins to think about what he'll do with his life, how he'll make an income--and let's not forget about the ladies. Deeper conflicts about the wider world strike him hard, and he's confronted with some religio-philosophical issues that he’d never considered. He meets more people on this journey, and their struggles as they travel alongside him only exacerbate his confusion about what to make of the magical realm they live in. Something about their world just doesn’t jibe with the natural order of the universe, and it lingers over them like a sort of odor.


Bovodar and the Bears Graphic Novel
Work on this continues as well. But the novel will be separated into three sections, separately released to the public. As stated before, illustration work on this is being done by Mary MacArthur, whose amazing artistic talent is the most suited for a work such as this. Look forward to more of her work on this project with future releases and blog posts.

Posted by Jack Mikkelson at 9:52 PM No comments: