I found this strange video of Christopher Lee, in which he is talking briefly about The Wickerman and a bit more about the Hobbit movies.

He looks like he's at the end of his life.  He slowly talks and says that hopefully, maybe he might live until next December to see the third Hobbit movie.

It is very sad to hear that he has many scenes in the final Hobbit movie and to know that he might pass on before even seeing it become a success.  He admits this.

But then, the sadness in this video is quickly interrupted when Lee does a plug for his heavy metal hobby.  It seems he has a heavy metal Christmas album called "A Heavy Metal Christmas Too."  I chuckled after hearing the sample he played.

Posted by Jack Mikkelson at 6:07 AM No comments:

Email ThisBlogThis!Share to TwitterShare to FacebookShare to Pinterest
Labels: Lord of the Rings, movies

A Thousand Words a Day

I found a great discussion about successful writing and marketing up on the Kindle Boards.

In May of this year, the author Russell Blake recommended 26 steps for becoming a successful writer in the current independent marketplace.

His fifth recommendation was the following:

Allocate time every day to write, and be disciplined. I suggest minimum one hour per day, or 1000 words. I actually ignore that and shoot for 5000-7000 a day when writing a novel, but that's just my approach, and it's not for everyone. My point is that you must be disciplined about your writing and develop that muscle. If you don't make it a habit, you won't write enough to put out one novel every four months, and you'll already be way behind the curve.


A thousand words a day seems like a sensible goal for any writer.  Just think, if one were to write 1000 words a day in their book, then in a full year, such a person would have a 365,000-word novel.

If you are a writer who is out there and dangling along trying to find some sort of structure in their craft, I recommend that for New Years' you resolve to write 1k words a day.  Doing so can only make you more productive as a writer.
Posted by Jack Mikkelson at 2:22 AM No comments:

A letter from the novelist Richard Russo has been making rounds through the internet in the last week.  In it, Russo is decrying the phenomenon of self-published authors, and he defends the current paradigm of published authors who have gone through the rounds, gotten an agent, worked with a publishing company, and has accepted a small cut for every sale of their book.

I can see the benefits of having a publisher.  They may find a cover artist for you.  They will edit your book and help you to polish it to marketable perfection.  They will even market your book for you--to some degree.  But often you are only taking home 25-30% of the profit.  Yet...a publishing house can market better than an author can, in most cases.

A lot of authors don't like this route, and they would rather put their work directly into the field for readers to enjoy.  Frequently, these authors are keeping 70% of what they sell.  Many of them make their own book covers, and most have friends or colleagues edit their work for them.

I've heard some writers argue that things are changing.  In the past, we lived in a world where you had to submit to publishers who seemed to behave as gatekeepers.  Only the most politically correct work would pass their test, and a lot of publishing houses seemed to have agendas.  If you were too original, these publishing houses would cast you out, and you would have to start from scratch and find some other publisher for your work.  It can be a demoralizing process to go through the painful rounds to find a publisher.

But now--contemporary writers argue--things are changing, and the gatekeepers are being overthrown thanks to the internet.

If this is the case, then what will happen with those publishing houses?

My guess is that the strongest publishing houses will remain, and more than ever, they will become like clubs that seem to grant a writer's work "legitimacy."  And being published by a publishing house will seem like a reward unto itself in the writer's world.

I could be wrong, but I just don't see the publishing industry collapsing altogether.

Posted by Jack Mikkelson at 4:34 AM 2 comments:

A friend brought another author to my attention who is making a handsome second income with his writing.  This author, like me, is self-published and not working through any publisher at all.  Last I heard, he is able to hire top-notch book cover makers, and he writes twelve hours a day on his books.

This is an admirable thing.  It gives me encouragement that this man can reach out to so many people so quickly with his work.  It gives me hope that maybe I can do the same.

I truly do wish I could write twelve hours a day, as he does.  But unfortunately for my readership, the sequels will simply have to crawl along as I am able to work on them.  My writing goes rather slowly, and finding affordable illustrators can hold things up as well.

But rest assured, I am steadily working on the sequel to Bovodar and the Bears, and it should prove to be even better than the first.
Posted by Jack Mikkelson at 10:02 PM No comments:

Today, across America, news shows on radio and television are spending a great deal of time talking about John F. Kennedy's death 50 years ago.

However, one hour before Kennedy was killed, the world lost a greater man.  That would be C.S. Lewis.  One of two juggernauts of fantasy fiction who inspired generations of writers since his time, Lewis was one of the two great Inklings--the other being J.R.R. Tolkien.

His books led many to Jesus Christ, and they still do to this day.  His most well-known anthology appears to be The Chronicles of Narnia, although my favorite work is his Space Trilogy, namely That Hideous Strength.

Two other great stand-alone works include The Screwtape Letters and The Great Divorce, the latter being one of my favorite depictions of Purgatory.

To honor him, a plaque bearing his name will be placed at Westminster Abbey's South Transept, famously known as Poet's Corner, where other English writers are either honored or actually buried.  Such writers include Shakespeare, Milton, and Chaucer, just to name a few.

Eternal rest, grand unto him O' Lord and let perpetual light shine upon him.  May he rest in peace.  Amen.

And may his soul and all the souls of the faithful departed, through the mercy of God, rest in peace.  Amen.

Posted by Jack Mikkelson at 7:00 AM No comments:

Bovodar and the Bears available on Amazon.com

To start off this blog, we are celebrating the first publication of the entire book titled Bovodar and the Bears. 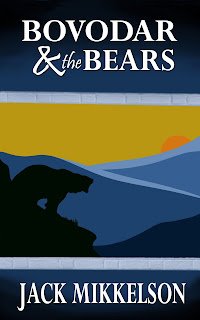 This is the story that tracks the entire adventure of Bovodar Yarkery.  The tale begins with his first encounter with the bears of Cave Hall, and it follows his journey westward into the deserts, through underground roads, and along the sea coast to the land of Nixwild where lives a wicked lord named King Valemod.

Bovodar and the Bears is currently available for Kindle, and it can be purchased on Amazon.com for $2.99.
Posted by Jack Mikkelson at 3:05 AM No comments: